Follow Tips to improve your English skills on WordPress.com

It was a beautiful summer day when we made our way down to Potsdam to hear Helen Strong give her workshop on “How to teach business English”. Despite the best efforts of Deutsche Bahn, it was a great turnout with around 30 teachers, trainers, language school owners and other miscellaneous ELTABB members attending down at the University of Potsdam. Helen herself had driven up from Ingolstadt the night before on her motorbike, so presumably was spared all public transport related dilemmas.

What I want to do in this review is describe the ideas that Helen put forward and also provide feedback of how it went when I put them into practise. On the day, we started off with speed networking; the classroom was rearranged into four rows of chairs, facing each other in two lines, with 3 questions provided by Helen, and three minutes to get the answer from the person opposite before the bell rang and we moved on to the next person. I really like it as an icebreaker; I ended up talking to ELTABB members that I had never spoken to before and what I especially like was that when the activity ended, Helen left us there in our new positions. It meant I went from my teacher’s pet position on the front row, right to the back row but it also meant I got out of my comfort zone of interacting with people that i already knew well. This is always a good thing!

I tried this out with two classes after the workshop and both times it was a success. The first group was actually a beginners group, and it still worked well. I asked them what they wanted to know when they met new people and we crowd sourced the questions. I also did with an intermediate group with some randomly chosen conversation questions. What I learned here was that I really needed a bell like Helen has. As she said it is important to explain the task beforehand, and I think the repetition aspect that is inherent in it really helps get learners going in a lesson.

The next discussion was about the difference between teachers and trainers. I don’t think it’s controversial to say there is a huge difference between teaching 30 school children and a 1-on-1 session with a business person. The way English language professionals approach this is still up for debate. The main point I took away from this was how we as workers shouldn’t undersell our knowledge and abilities, and also that it’s important that we are clear what they are for each of us.

The next section was about the importance of a needs analysis. Helen’s opinion was that this is a critical step for a taking on a new client as a BE trainer, and should be non-negotiable. We discussed the various ways you can carry out a needs analysis, including shadowing, interviews or questionnaires. I decided to test this with a potential new client of mine. I began with an interview with the department head. She was very clear that the workers needed English due to a switch in the computer systems in the company from German to English, which is happening in August. Before the workshop with Helen, this would have been enough for me to begin with. In this case, I decided to use the needs analysis form that had been provided by Helen. 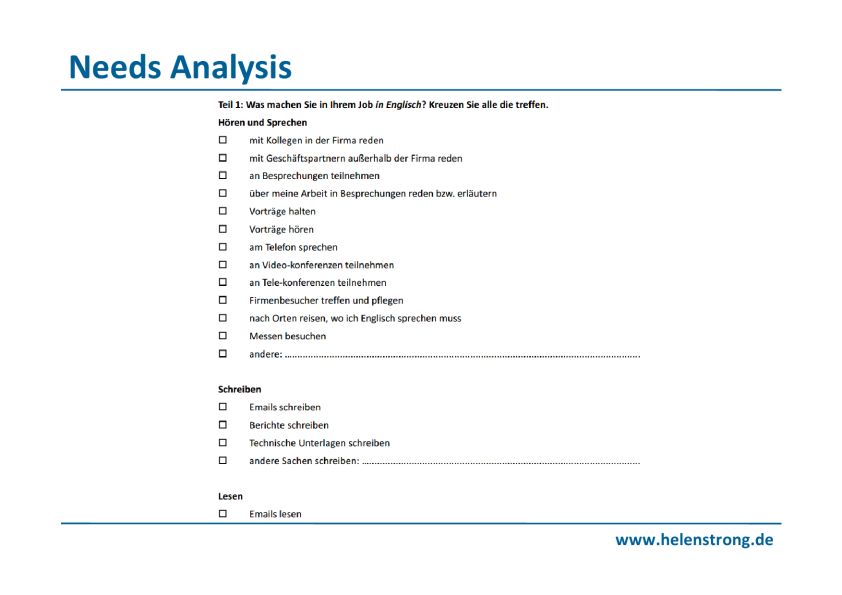 It’s a tickbox exercise covering many typical business interactions. I had twelve respondents, who I met for an individual face to face meeting, and what is interesting is that none of them mentioned computer systems, even after some gentle prodding from me. The biggest concern for nearly all of them was telephone English or speaking with English speaking colleagues. As this was different from I had initially been told, it already highlighted how useful this tool was going to be.

Part two caused some confusion at first, but after some explaining, and some thinking most got the gist of it. This particular cohort only only communicates with two groups of people in English: tenants and Swedish colleagues. So I didn’t get too much new information here, but I think that comes down to this particular situation. In a more varied international setting its value would increase a lot.

Part Three was particularly interesting. Again no mention of the forthcoming computer system change. However it provided a lot of topics will be used in upcoming lessons. The fact it was in German relaxed the students, although one was frustrated that she couldn’t express herself as she wanted in English. Overall I think that Helen’s advice to allow German at this stage is definitely sound advice. Different students used that permission to differing degrees, some wanting an early start to their practise, others wanting to get their reasons across in German.

The final section was a description of English language capabilities taken from the CEFR framework. I have to be honest and say I didn’t get much benefit from this, except perhaps a small psychological insight. I found students were very poor at correctly identifying their ability. Some who used English very well were marking themselves as an A1 and others who couldn’t complete a sentence in English were marking themselves as B2. Obviously, there will always be outliers but I’m not sure if I would include it in a needs analysis of my own. Overall, I found the document to be a very useful tool for a BE trainer and I am now firmly on the needs analysis bandwagon.

After all that, we had a break with a very nice spread laid on by the organisers. What I particularly liked was that Helen was very accessible here, as I had some questions that I wanted her opinion on. It was interesting to hear that networking brought in far more business for her than her website did. Which makes the next Stammtisch with ELTABB even more vital!

After the break we returned with a look at business skills starting with the six classic skills. What Helen did next which I found very interesting was transitioning these into functional skills. The business matrix that she used makes this very straightforward. The key point there sís inter… Rather than learning the six skills in solution, the suggestion is to see how these skills are usually used. I would highly recommend the use of her business skills matrix for devising training sessions when a specific purpose can be identified. Following this was a focus on culture in the workplace and a discussion of how these sometimes difficult issues could be addressed.

The penultimate segment dealt with the difference between International Business English (IBE), where at least one speaker has English as a first language, and Business English as a Lingua Franca (BELF), where none of the participant share English as a mother tongue. I found this idea very interesting, and getting the terminology made this different ideas more concrete. These particular issues and how you deal with them, are taking on increasing influence in Germany and particularly Berlin. The point being that communication and comprehension have to be the key as BE trainers. The week after I found myself saying to a student “That expression doesn’t exist in English” but when she asked me what was wrong, I had to admit there was no mistake. The sentence was grammatically and semantically sound. This prompted the workshop to pop into my head, and this reinforced my decision to change my mind with the reaction to the student. The sentence was acceptable International English, the other students, as well as me, had understood when it was spoken. What Helen Strong focused on, as I understood it,  was making students aware of what barriers to communication might exist, and her argument that language is really the last piece of the puzzle when it comes to BE training seemed particularly apposite here.

The workshop finished with a description of the Cert IBET, which the workshop took a lot of information from and Helen is a provider of. The pitch was good, especially as we all know how much Germany loves certificates! As Helen said, it is something which could make a trainer stand out from the crowd, and my feeling on the day was that some attendees were interested in having her return to Berlin to provide it. I think I might be one of them, so if there are any other like minded members we should discuss it (on Ning of course!)

Overall, there was a lot of interesting point discussed, and as I’ve shown, plenty which can be put into practise. What I liked the most, that I’m definitely planning on using is the business skills matrix, and the necessity of a needs analysis is now a firmly held belief.

What about you? What did you find interesting? Was there anything you disagreed with?

Don’t forget to check out the slides from the workshop!

Analysis of A Dance with Dragons

A Year in Berlin

An Englishman in Berlin

Blog about life and culture in Berlin, Germany